We recently added a blog post about the modern data stack in an effort to educate about its history, key components, and some example technologies.

In this post we’ll share a use case using some of these tools — specifically how we at Preset are currently using Fivetran and dbt centered around a BigQuery warehouse to visualize our self-service revenue analytics from Recurly!

We’ll dive into the source data ingested via Fivetran, how we’re transforming that data into datasets to be used for visualization, and some of the specific metrics we’re presenting to track Preset’s revenue goals.

Recurly is a subscription and billing platform used by brands to grow their recurring revenue from acquisition to retention to scale. It provides enterprise-class subscription billing management for thousands of businesses worldwide, and allows them to dive deeper into their Recurly payment data to better understand business financials.

Fivetran, the leading data extraction and loader tool, provides a native connector to connect to Recurly and load that data into our BigQuery cloud data warehouse. Fivetran provides an ERD of what is loaded on a connector basis. The core of Preset’s Self-Service Revenue dashboard is created off three primary data sources that we’ll see below.

From Fivetran’s ERD, we can see that the Recurly model includes many different revenue source tables such as gift cards, coupons, line item history, and more. At Preset we care primarily about plan, subscription, and account histories — that is the data that provides us the ability to track our key self-service revenue metrics. Using dbt, a data transformation tool, Preset creates datasets for the specific tables and data we care about to internally track our revenue analytics. The goal in sharing our dbt SQL transformation templates is to provide one approach to revenue tracking — depending on how your business generates revenue, the other data models may be of interest!

Here at Preset, we generally like to take a dataset-centric approach — at a high level this means that we produce and expose highly denormalized datasets for consumption. To learn more about this approach to visualization check out the blog, The Case for Dataset-Centric Visualization, by Max Beauchemin! 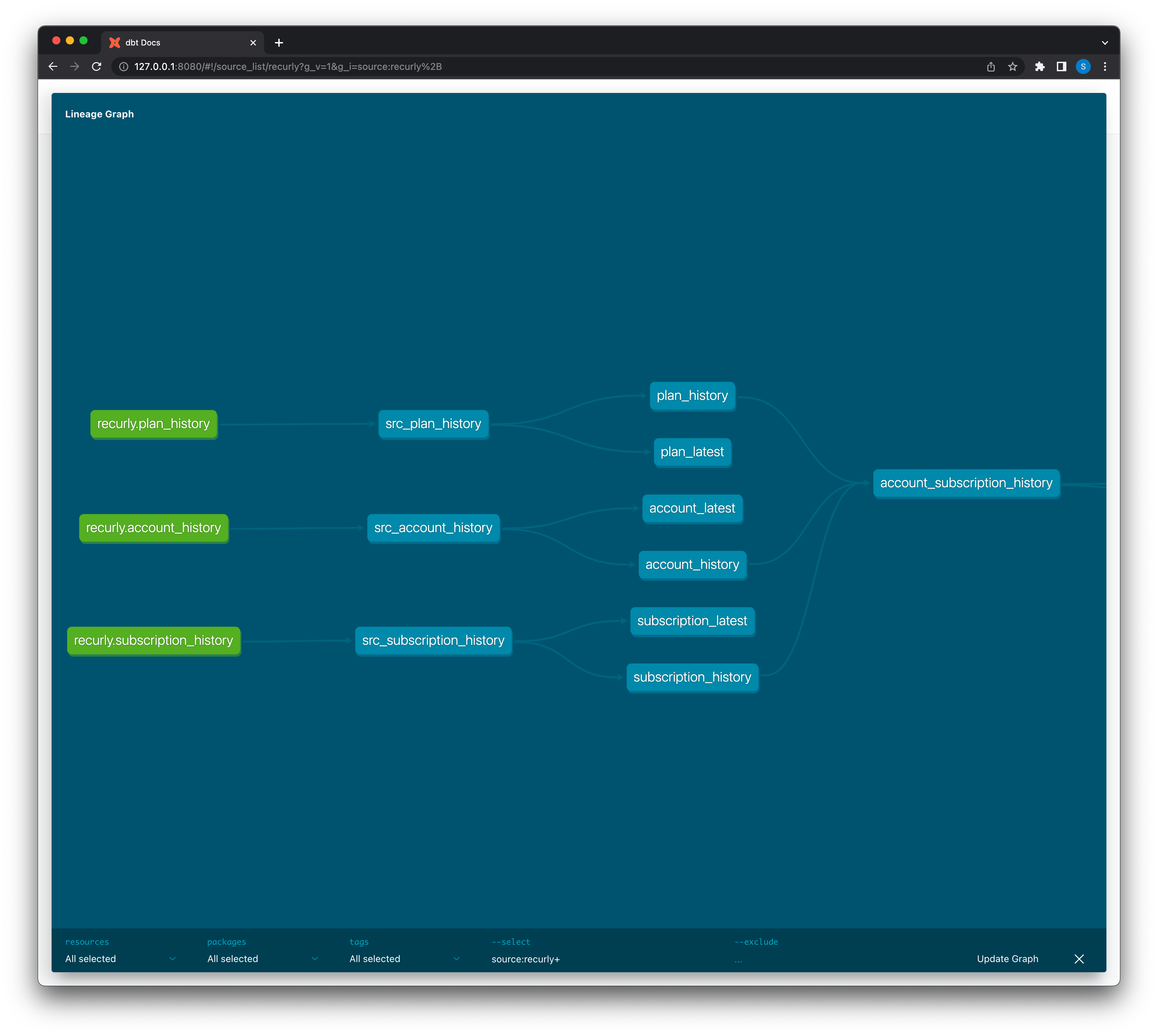 The first metrics we’ll be looking are created off of our derived dataset account_subscription_history. Below we’ll walk through how we derive this crucial dataset.

All of the values in the charts have been modified for security purposes, but we have attempted to preserve the general trends and shapes — the logic in how we ultimately arrive to our final metrics dashboard is as close to the reality as we can share!

In the lineage graph above we can see the three raw tables (green nodes) that we load from Recurly, into our BigQuery warehouse, all through Fivetran with no transformations.

All of the blue nodes in the lineage graph above are datasets that are derived i.e. created via modular SQL using dbt.

Using dbt, we write SQL to select and create narrower tables from the raw untransformed data within the same warehouse.

The primary purpose of this first layer is renaming fields to make entity names clearer and add effective dates — the updated_at field is being renamed to effective_from and an effective_to field is created with the help of various SQL functions.

In the section regarding the second layer, we’ll see how this seemingly benign change to track effective dates helps us visualize our self-service revenue over time!

We can see that the datasets in the second layer of blue nodes are all derived from these src_* datasets. The primary purpose of this second layer is to materialize daily snapshots (materialize config in our dbt SQL models below) of our plan, account, and subscription history datasets.

This is a lot of data duplication on a day-to-day basis, but there’s a good reason for it! The historical datasets are super small, and materializing daily snapshots of the entire history to today enables us to perform accurate time-series analysis to get a trusted and clear picture of how self-service revenue is evolving over time.

For example, something as simple as number of customers over time would be difficult in the first layer datasets, but become much easier to calculate using daily materialized snapshots.

In the lineage graph you’ll notice `_historyand _latest` datasets — we do not currently use or materialize the latest datasets so we won’t go into them.

In the models above, we can now see how we’re utilizing our effective_from and effective_to fields — we’re joining on date-time values on a specified range to date_spine using the effective date fields.

dbt comes with numerous pre-built macros to simplify writing modular SQL. A particular subset of macros known as SQL Generators are included in the dbt-utils package.

These macros generate SQL (either a complete query, or a part of a query). They often implement patterns that should be easy in SQL, but for some reason are much harder than they need to be.

date_spine returns the sql required to build a date spine.

A date spine table is useful for any use case that requires rows of dates where no dates exists in the original data.

To solve this you need a master date/calendar table — and this can be done using the date_spine macro!

The dbt date_spine macro will include the start_date (if it is aligned to the datepart), but it will not include the end_date.

The general code to utilize the date_spine macro:

At Preset, we generate the date spine we need as:

Now we can run queries to show the past for any arbitrary number of days into the past!

to visualize the metrics we’ll get to in the next section!

The query above has been modified to only show MRR (monthly recurring revenue) calculations — ARR (annual recurring revenue) can be calculated by including `mrr_expr 12 AS ARRas an additional line wheremrr_expr AS mrr` is. For the sake of complexity this code has been simplified, but we’ll still see both MRR and ARR charts in the next section!*

In this section we’ll see some of the visualizations and metrics we use at Preset to keep tabs on our self-service revenue growth over time. Specific numbers have been hidden, but all of these charts were created through configuration in the no-code chart builder interface — the queries provided were generated by Superset based only on the user configured charts — you can learn more about chart creation in the Preset docs!

Annual Recurring Revenue, or ARR, is subscription metric that shows the money that comes in every year for the life of a subscription. More specifically, ARR is the value of the recurring revenue of a business's term subscriptions normalized for a single calendar year. Here we see our ARR not including trial accounts. 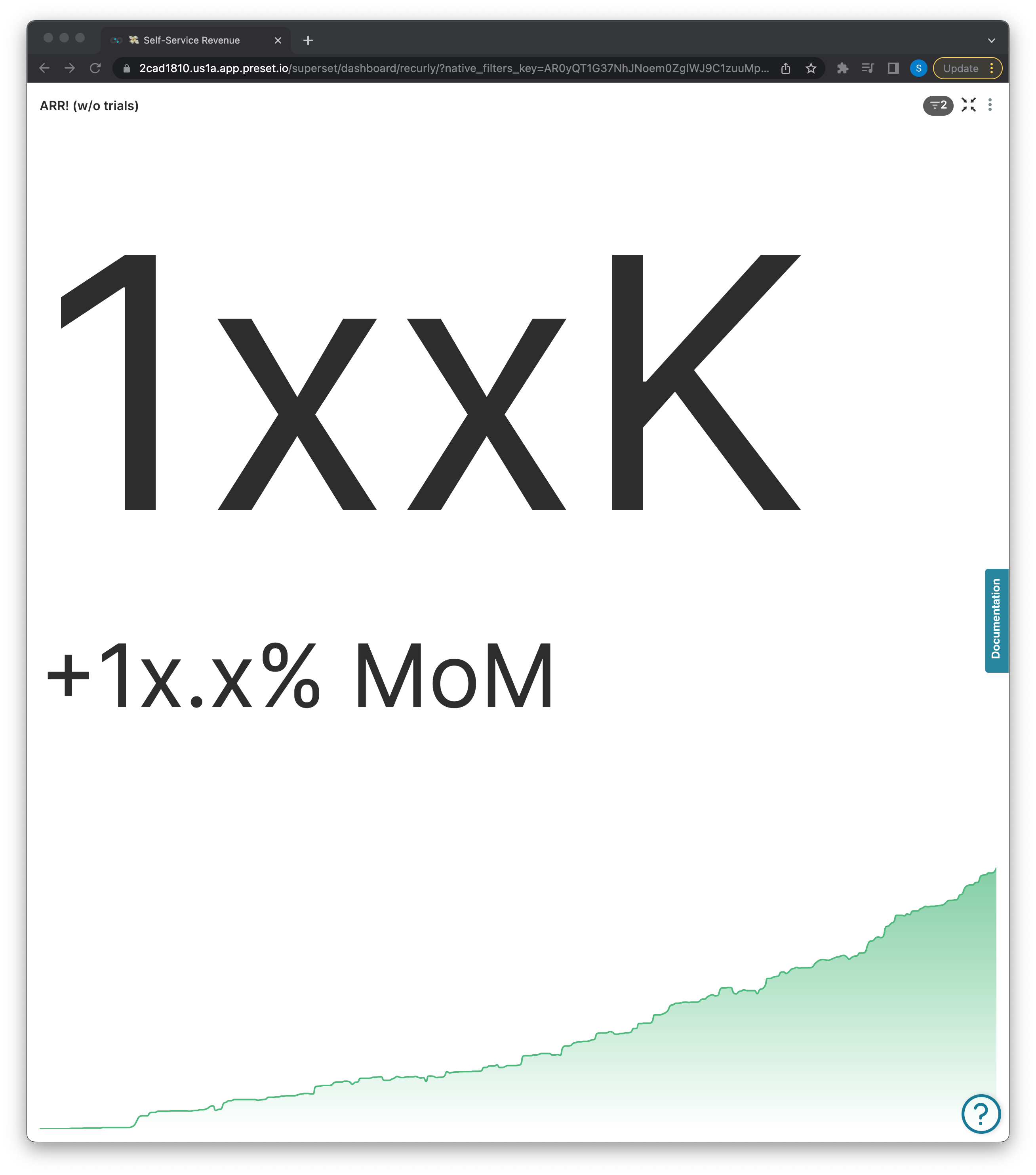 The number of total accounts currently paying for Preset services with the month over month increase below. 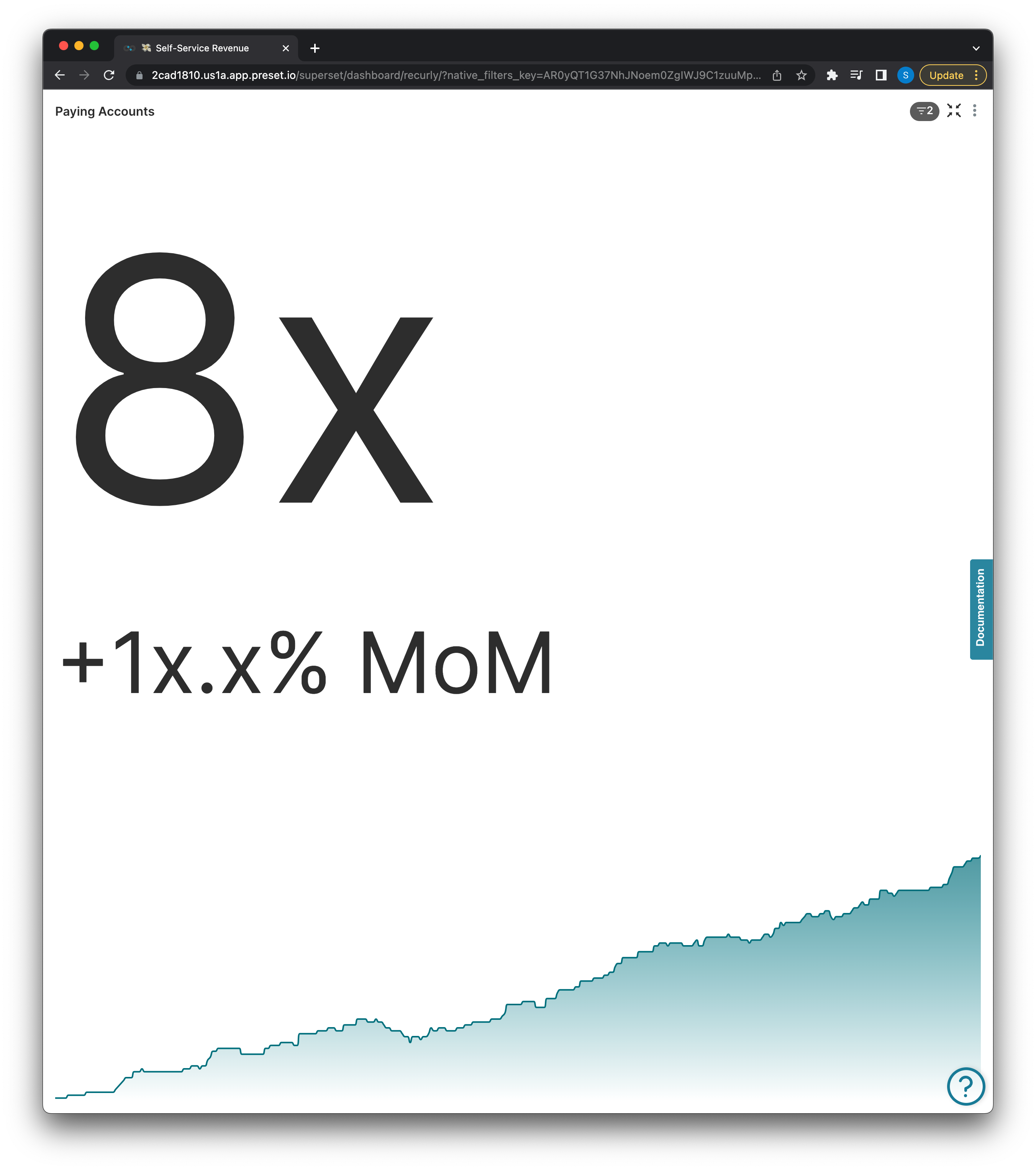 Total number of accounts in a trial status with the month over month increase below. 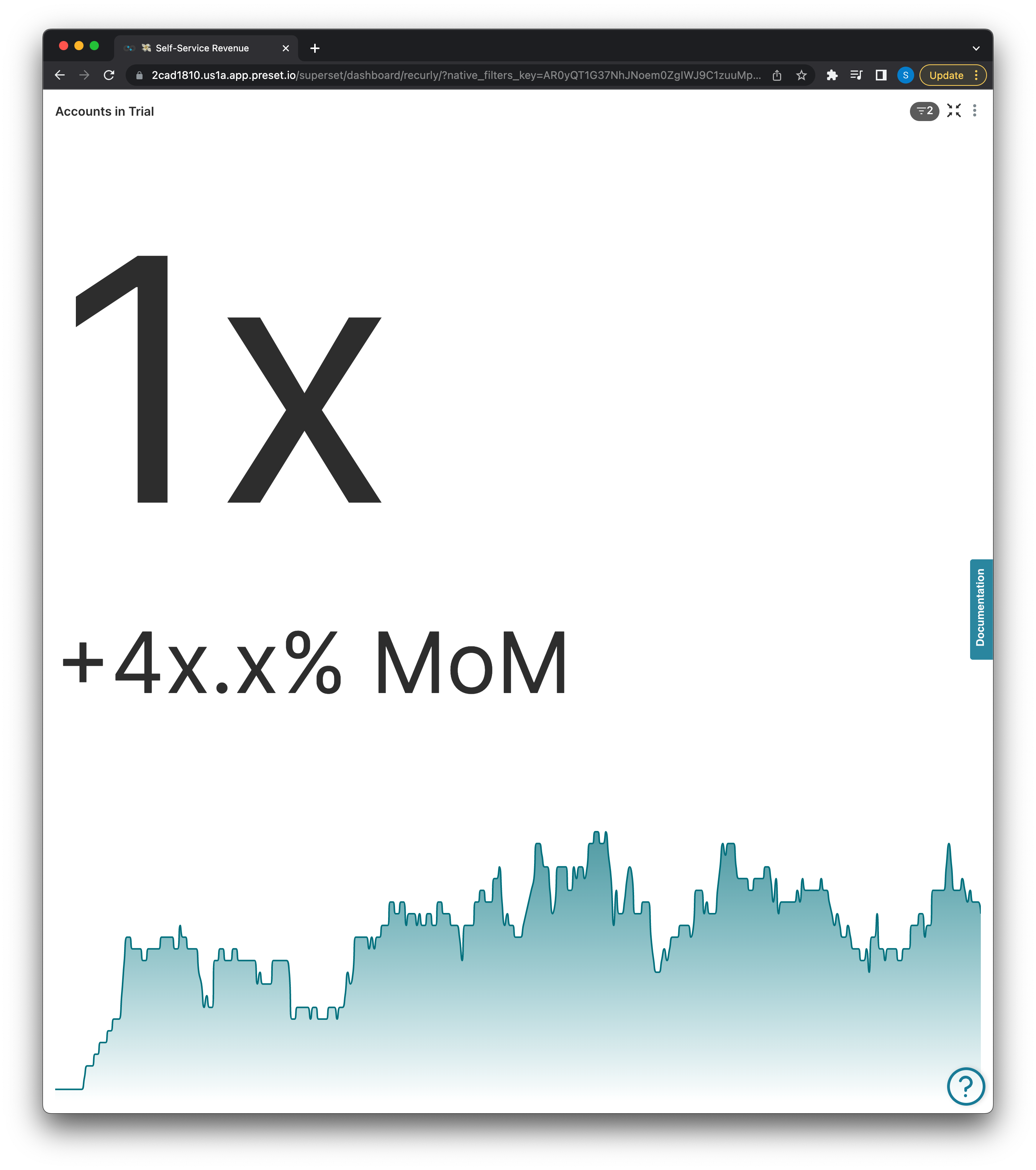 ARR comparison of our standard vs. upgraded accounts. 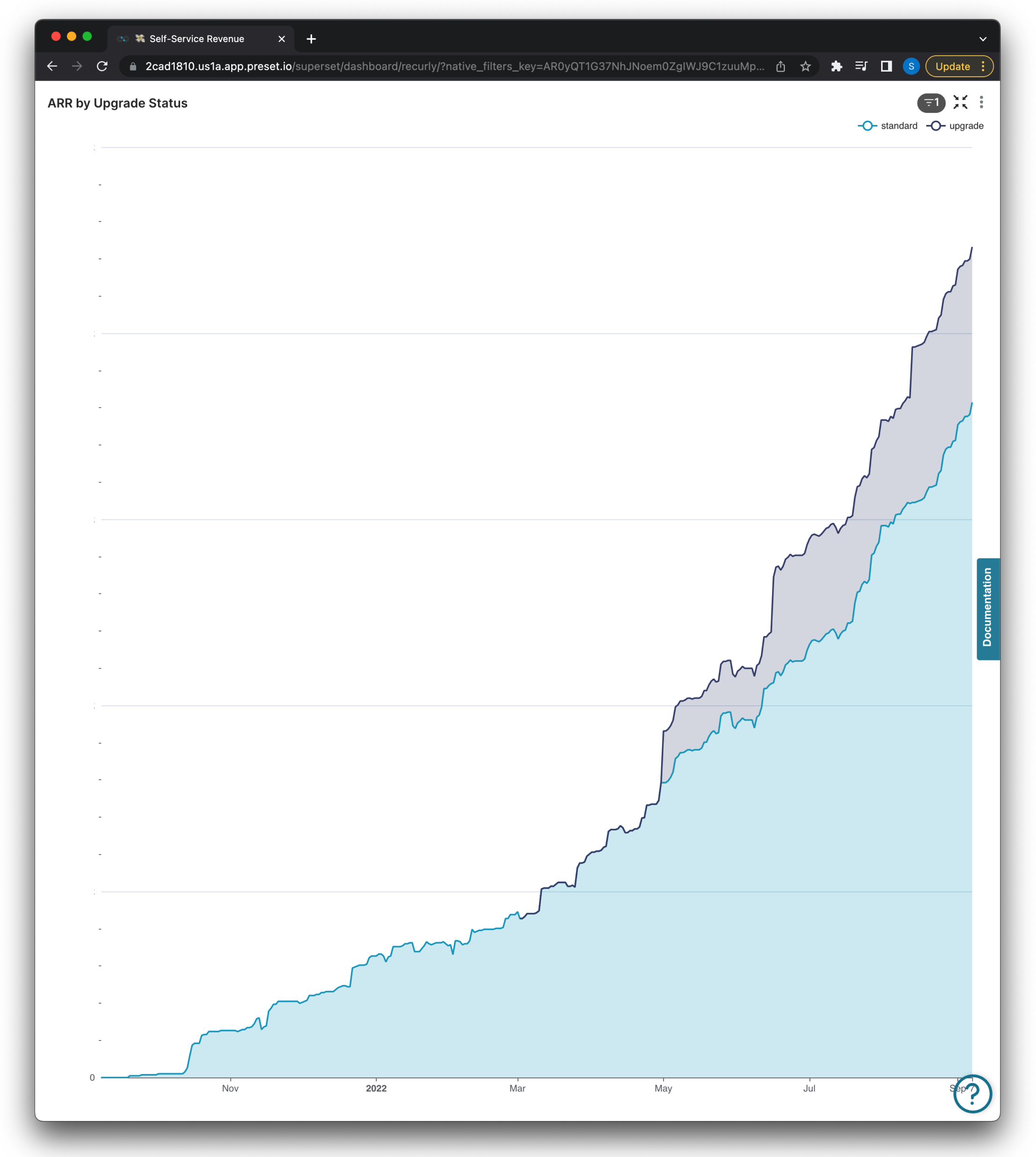 Y-Axis dollar amounts have been hidden above

Both of these metrics look at current ARR with the X days ago variation added to it, the only changes in the query will be the columns used to obtain the metrics. 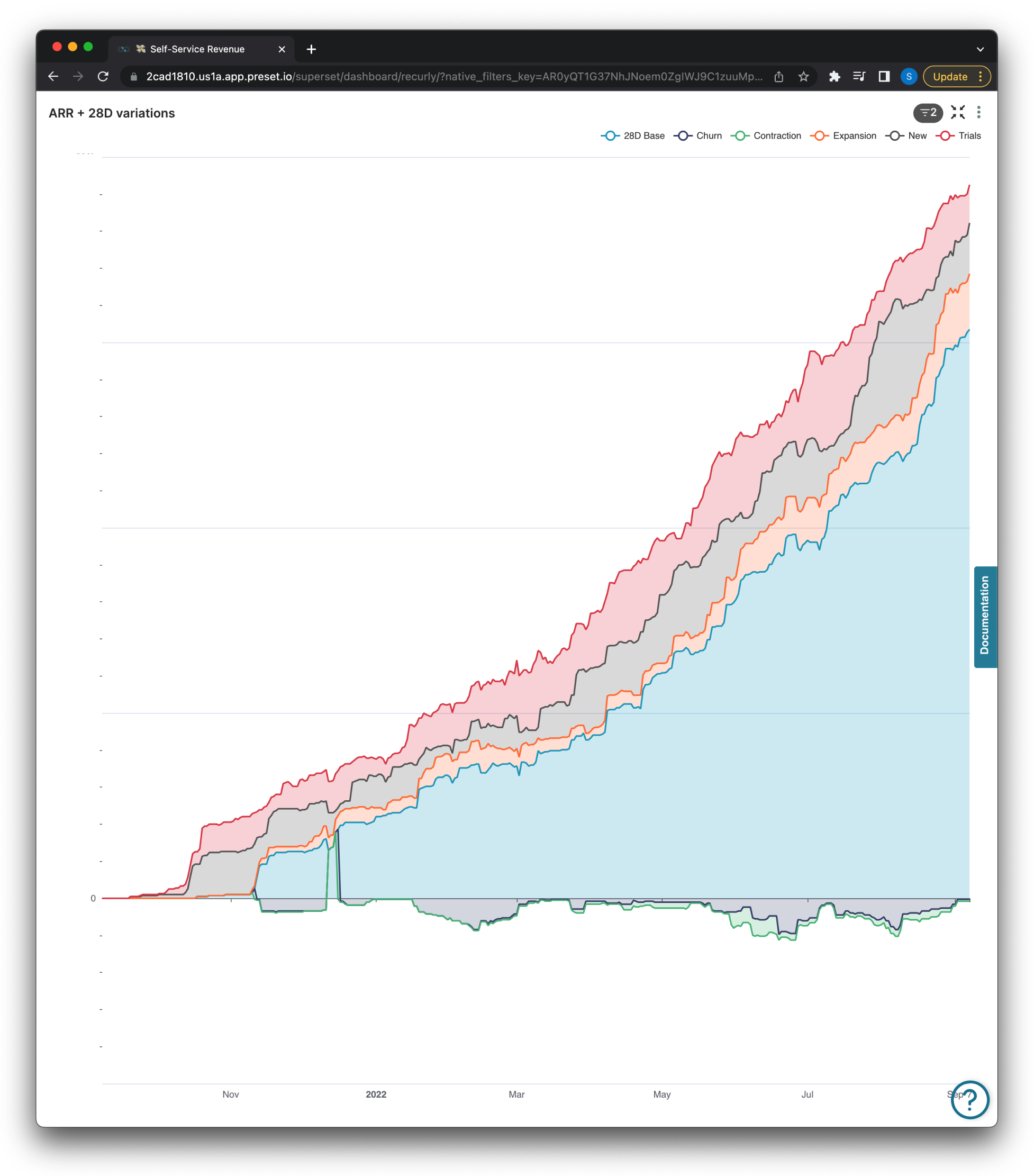 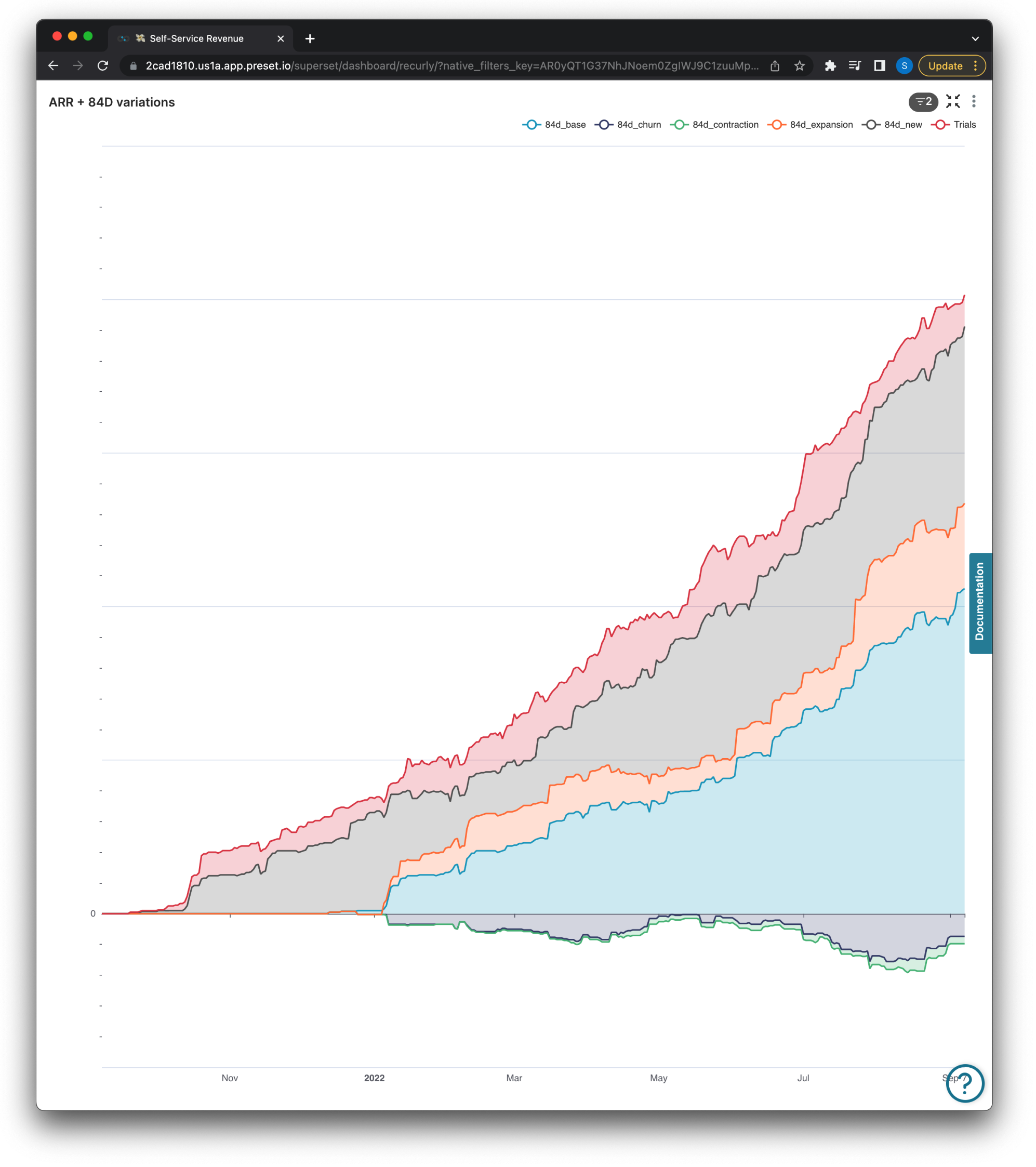 Y-Axis dollar amounts have been hidden above

Win rate by count is the ratio of deals won to the number of total closed opportunities. Here we’re visualizing Preset’s win rate on different X day ago variations as well as the total cumulative win rate for comparison. 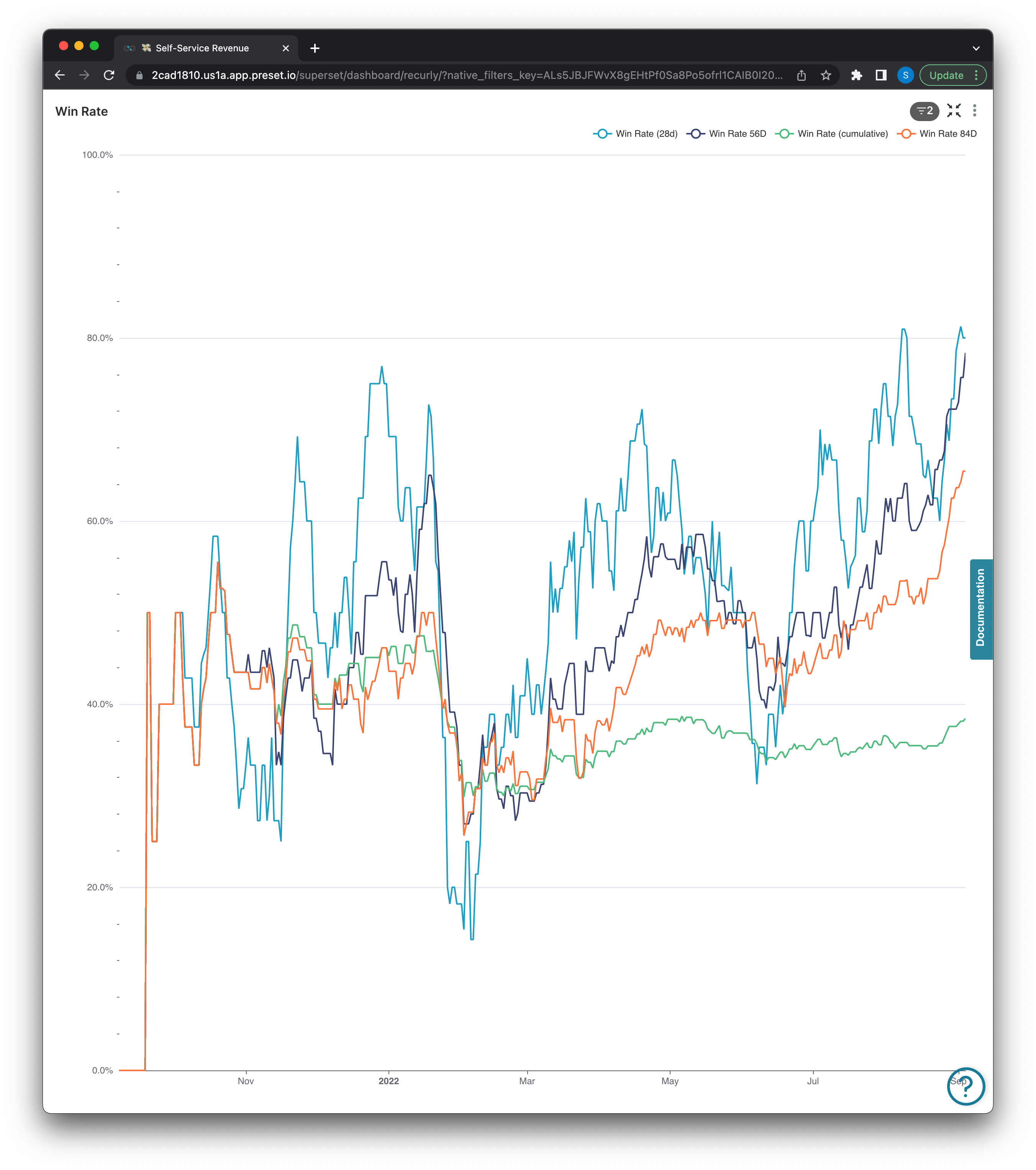 Net Revenue Retention (NRR) is the percentage of recurring revenue retained from existing customers over a given time period (usually monthly or annually). It takes into account income from upgrades, cross-sales, downgrades, and cancellations. 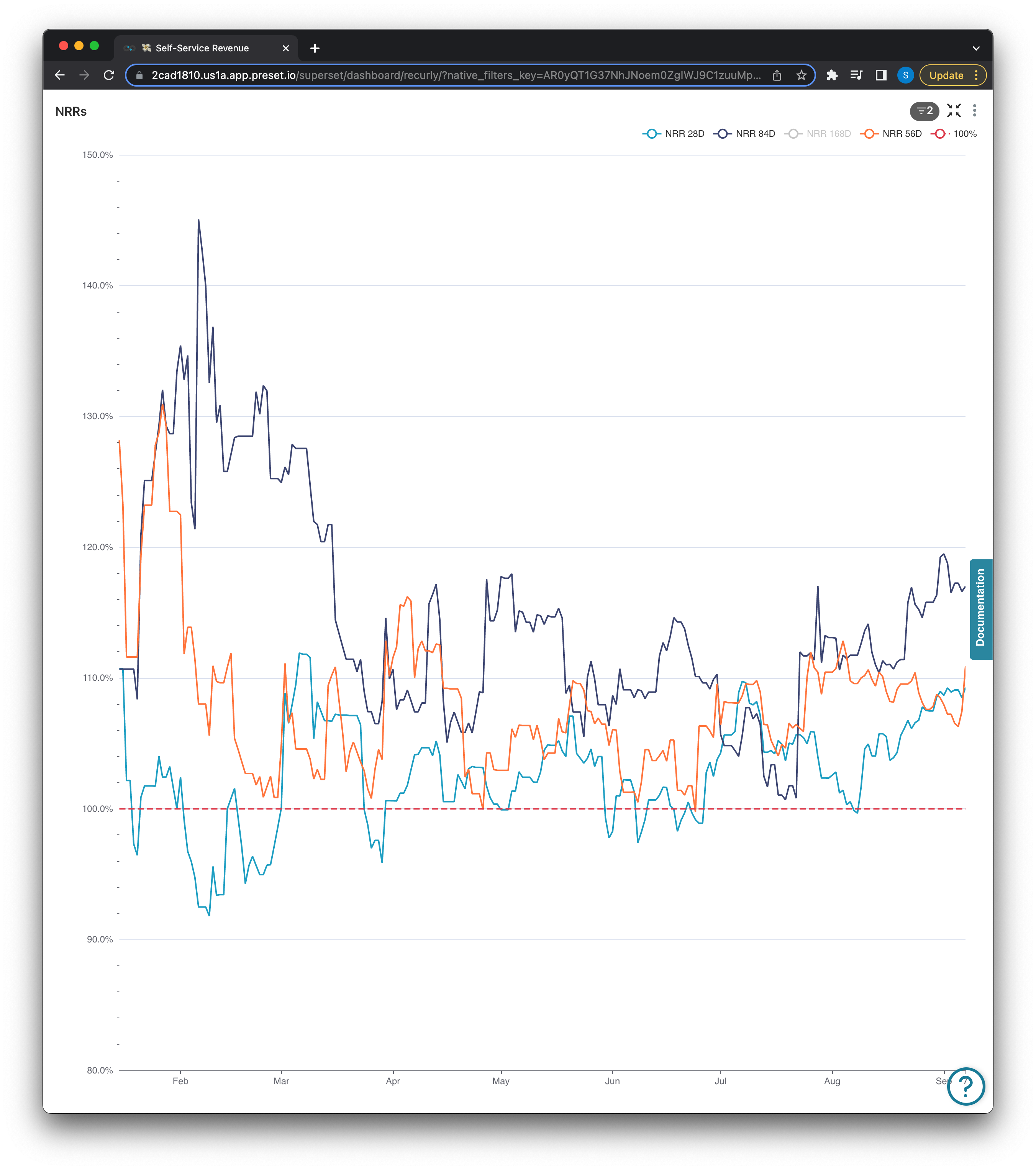 From above we can see the bulk of the self-service revenue metrics we track come from our derived account subscription history dataset. We can go further and derive an account_subscription_latest dataset (in a similar fashion to how the *_latest datasets were created above) to visualize a couple of more metrics:

With this dataset we can now visualize the metrics below!

Using only three (of many) raw data models Preset is able to visualize a wide array of various metrics to monitor its revenue growth over time. I hope this can provide some real world context as to what is possible using these specific tools!