The State of ECharts Time-Series Visualizations in Superset

Apache ECharts is the future of charting for the Apache Superset project. The ECharts project has a strong governance model (Apache!) that's a good fit for the Superset project, high performance, a powerful, declarative API, and a thriving community.

The Superset contributor community has been steadily migrating old chart types from NVD3 and adding new ECharts visualizations entirely for over a year now. I wrote about the challenges the contributors were facing with NVD3 and why ECharts offered a more promising route in this blog post.

In this blog post, I will focus specifically on the current state of the ECharts time-series visualizations in Superset. This post is relevant for both users of Superset (best for v1.3 or later) and Preset Cloud.

However, life wasn't always this way. In the first phase of the rollout, the core contributors actually released a single, unified Time-series Chart. To switch between the different time-series chart types, an end-user had to resort to the Customize tab.

Admittedly, the core contributors understood that this was an awkward user experience but they knew it was just a temporary one. After all, all of the other charts in Superset were separated into their own independent chart types in the viz picker.

Since then, however, the core contributors have exploded and transitioned the unified time-series chart into separate visualization types to stick to the design pattern that the rest of Superset followed.

In the rest of this post, I'll walkthrough the different time series ECharts visualizations and the use cases for each of them.

Line charts are a classic chart type that excel at visualizing how a continuous variable changes over time.

You can also use a time-series line chart for visualizing discrete values, but a bar chart is more effective and less overwhelming. For example, the following line chart requires more work to interpret: Compare this to the bar chart equivalent: Why is this the case? Essentially, it boils down to the percent of the "ink" dedicated to representing the actual quantities we're interested in.

In the line chart, most of the "ink" goes towards the lines between the data points. In the bar chart, almost 100% of the ink is used on the bars representing the data points themselves.

A time-series bar chart also excels at showcasing change over time, but for discrete values instead of continuous values. In many business domains, the distinction between discrete and continuous values is somewhat subtle. Daily member counts feel like they should be a continuous variable, but in reality each member joins in a specific, discrete timestamp. A better framing may be the amount of binning that's applied to the data before visualization.

If we change the binning from daily to monthly, the chart feels more discrete but also, more importantly, immensely more useful and interpretable. 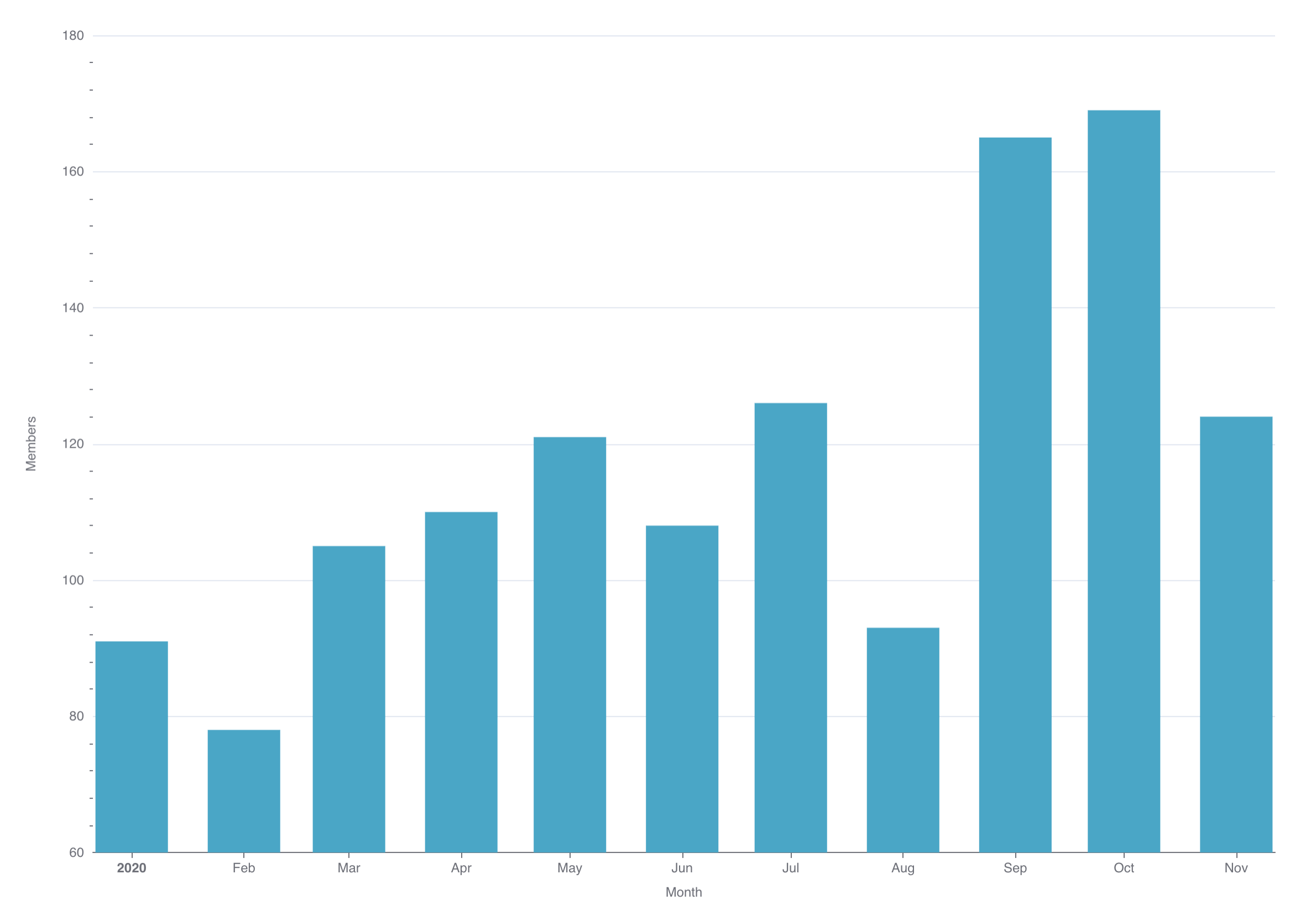 A scatter plot visualizes specific measures using dots. Time-series scatter plots are especially useful when you want the viewer to be able to quickly interpret every single data point. In most cases, time-series bar charts may be better fits for showcasing individual values varying over time. In their current form, time-series scatter plots are one of the least useful charts in this list.

Area charts are best used for understanding how ratios, proportions, or percentages change over time.

In the following example, we visualize the number of hit games (>100k sales) for each video game console over time. In this case, we aren't visualizing proportions or percentages but instead raw counts (for each console): 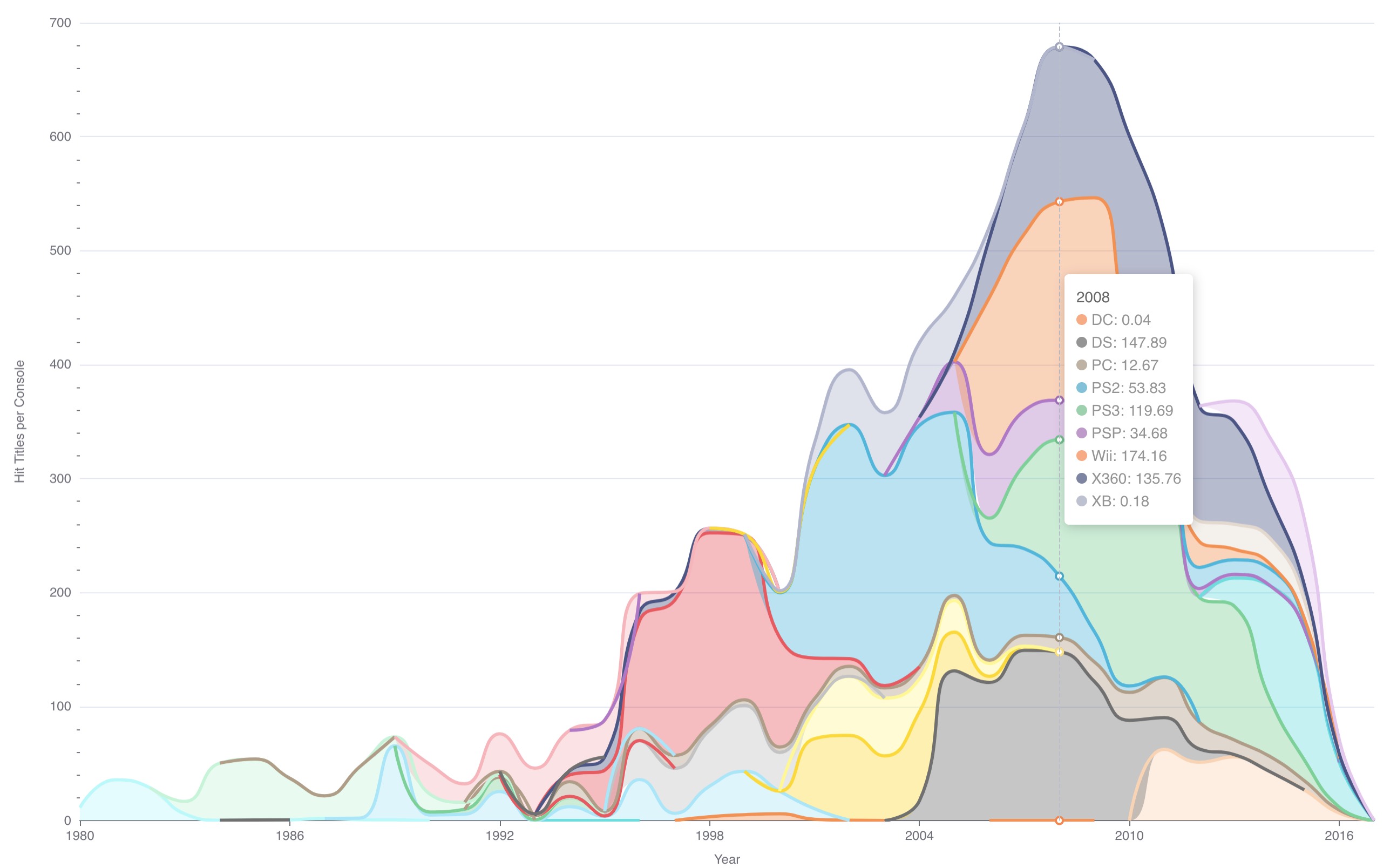 A smooth line chart seeks to de-emphasize the daily, weekly, monthly, etc changes by (literally) smoothing out the line.

The flip side of a smooth line chart is a stepped line chart. A stepped line chart aims to emphasize the rate of change between time bins. As indicated by the name, each data point is connected using a right-angle "step" containing vertical and a horizontal line fragments. This chart is less useful as a stepped chart. In general, stepped line charts have specific use cases.

For example, we may want to emphasize the time periods when the number of active user spiked and dipped: